As the sign says, “Welcome to Camp Durant!” Our beautiful camp property in Carthage, NC, is home to fantastic facilities, programs and staff. Camp Durant is the larger of our two camps that make up the Occoneechee Scout Reservation (OSR) and operates as a full-service summer camp for the Scouts of Occoneechee Council as well as other councils in the vicinity during the months of June, July and August. The Council currently offers five weeks of summer camp but will expand as attendance increases.

Camp Durant has some of the best facilities that a camp can offer! Following a generous capital campaign, Camp Durant underwent major improvements, including building our fully air-conditioned, 700-seat Grand Lodge Dining Hall that can seat the entire camp population at once! The Grand Lodge also boasts four serving lines and a full-service Trading Post and Grill underneath the main hall. Other key improvements were made to the following:

Camp Durant has 15 campsites, each divided into two sides, and both sides feature a permanent shelter with electricity and lighting. Each campsite also has a shower house, complete with three hot/cold showers and three flushing toilets. These shower houses also allow for electric power during summer camp. In addition, the entire camp has been wired with fiber-optic cable, which allows for both wired and wireless high-speed internet connections at most locations.

NOTE: Some GPS apps and devices DO NOT place you on Old Carthage Road for this address, which is incorrect. The location IS on Old Carthage Road, and we recommend using a different device for directions if possible and/or using the map link below. Thank you for your patience!

To make a reservation at Camp Durant, please follow the link below. We look forward to seeing you here! 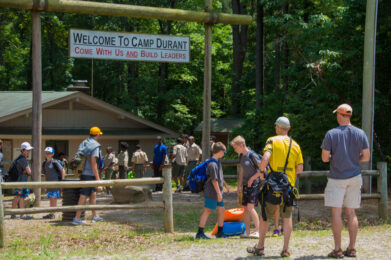